"DOYCH" Ltd is Bulgarian company, that has won market leadership positions and customers trust with the development, manufacturing and selling of natural food supplements, foods for special medical purposes and cosmetics with high quality, proven effectiveness and safety. "DOYCH" Ltd products are manufactured in our own modern production facility, meeting all European requirements.  "DOYCH" Ltd has all necessary certificates – ISO 9001:2015, НACCP , GMP - REGULATION (EO) N1223/2009, REGULATION N8 & N47, BDS EN ISO 22716:2008, as well as a registration certificate from  U.S. FDA  and European certificate for conformity that gives the right its products to be marked with the sign CE.

DOYCH Ltd. started its business in January 1993 with the development of the first product in Bulgaria that contained dry snake venom of the Viper – MATSAN DOYCH® (cream for joints, bones and tendons), which recipe is based on the results of the research, initiated and financed by "DOYCH" Ltd. As a result of the conducted research a neurotoxic fraction of the snake venom has been isolated by our own methodology. The subsequently made pharmacological research, as well as the work of the entire team, had confirmed without question the effect of the dry snake venom of the Viper. The quality of the joint product – MATSAN DOYCH® - the undoubted favourite on the market for more than 20 years, has been tested and recognized by many authorities in medicine. Their reviews have been announced on specialized conferences and are published in scientific editions and in the media.

Developed and launched is also another product, containing dry snake venom MATSAN DOYCH®C (cream) – for strengthening the venous circulatory system (in case of hemorrhoids, varicose veins and hematomas). By special technology has also been developed the first herbal concentrate MATSAN DOYCH®R for maintenance of the hygiene and the physiological processes in the oral cavity. 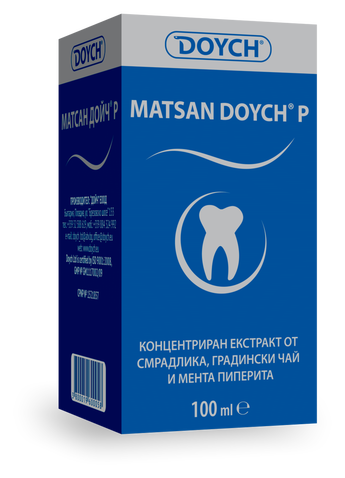 The earned trust and recognition of the customers has stimulated the team of professionals at DOYCH LTD to develop and launch series of food supplements, containing innovative active ingredients, unknown until now on the Bulgarian market. Extremely popular have become the products – CARDIOHELP MAX® - for improving the functions of the heart and the vascular system (now in combination with Q10), NEOFLEXIN® - for supporting apparatus and musculoskeletal system troubles, L-THEANIN® - effective for mental and physical stress, tenseness, anxiety, insomnia, RESPIHELP® - effective for respiratory diseases. As well as the products -AMINOLIV® - for helping the normal course of liver functions,  GINKO ACTIV - for memory, concentration and blood circulation aid. IMMUNOGUARD® - powerful immunomodulatory, as well as the product in aid of the immune system VITAMIN C with ROYAL JELLY, etc.

In 2011 DOYCH LTD begins manufacturing a group of products with special purpose – FOODS FOR SPECIAL MEDICAL PURPOSES. The new products are composed of special nutrients, the properties of which are adapted to certain diseases, disorders or medical conditions.

DOYCH LTD is the FIRST enterprise in Bulgaria, which met the high requirements for the manufacturing of  foods for SPECIAL MEDICAL PURPOSES and for the time being the only one that has received this registration. Such is the product NEOSTAVIT®M – for troubles, disorders and medical conditions of the supporting apparatus and musculoskeletal system.

As well as the latest products RENOHELP®M and LIPOMEZIN® –special developments of the company’s team of specialists in cooperation with leading physicians and professors in the relevant fields.
RENOHELP®M is phyto product, recognized by medical specialists of repute for being extremely effective in chronic renal, metabolic disorders and infections of the urinary system. The clinical studies have been conducted in the Department of Nephrology and Transplantation at “Aleksandrovska hospital”-Sofia, as well as in Multi-profile hospital for active treatment ‘Plovdiv’ and in Medical University – Plovdiv. Special report, dedicated to the excellent results from the application of the product on patients at ‘Aleksandrovska hospital’ and to the assessment of its effectiveness, was read by team of doctors, led by prof. Emil Paskalev at the highest forum ‘National conference of nephrologists’ in Hissar in October 2013 and 2014.
LIPOMEZIN®  is the result of successfully carried out innovative project – development of the company’s specialists, for regulation and maintenance of the normal cholesterol levels in the blood and reducing the triglycerides. The conducted clinical trials show significant reduction of the LDL levels of the cholesterol and triglycerides.